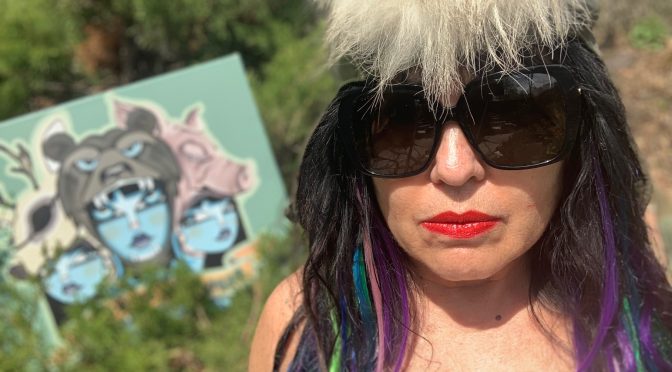 A breath of intoxicatingly fresh air — that’s the effect of Mellee Fresh.

The singer-performance artist and her partner in creativity, Clive, are one dynamic duo and they electrify existence everywhere they go.

They added another Bev Hogue painting to their eclectic collection recently and I’m very happy with their choice: Disguise & Dolls, a personal favourite.

Melly poses here alongside the art, adorned in a Beluxe-Pretty Fierce singlet. I just had to share. 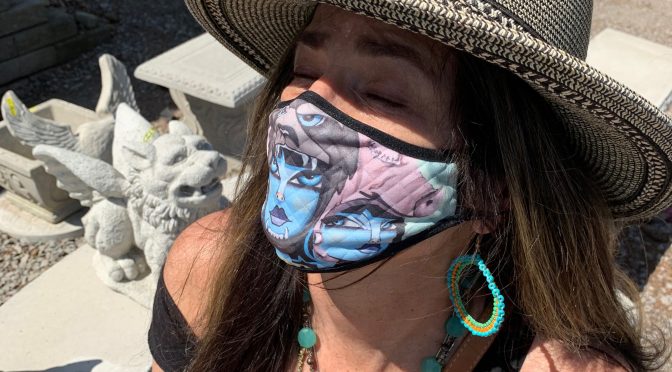 These quilted designs are lightweight, comfortable and washable products that are fine for distancing but not N95 protection level.

They can be ordered at beluxe.tv

The way-back machine has been been working overtime in my studio.

Buzzkill, Deadpan Delivery and Crime of Fashion emerged from a twisted trip through 1940s movie posters.

Sea No Evil and its 3-D sister, Gillzilla vs. InstaGamera, surfaced after a voyage through B movie horror flics from the 1950s.

In the 1960s, late night TV was jammed with so much low brow content that these classics blended together as one black and white experience.

I never put much thought into it, but the B&W movies I watched might have influenced a style that emerged as blue tones in graphic contrast.

Even Mad Magazine was largely monotone. And among the regular features, none had greater impact on a young artist than two stark, silent spies. 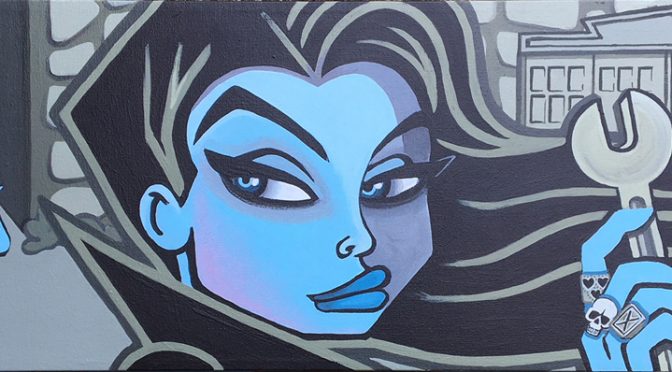 Rumbling down the one-way street in front of my studio was a collection of motorcycles finishing up a day of cruising. It was twilight and the slight curve where the street turns at the base of the hill is a natural spot for gravel and sand to gather.

One of the riders skidded and dropped the bike. It was low speed, but still that’s a lot of metal to connect with pavement.

We were watching the impromptu parade from inside and saw the whole thing happen in slow motion.

The 20 or so riders dismounted to survey injury and damage. As helmets were removed, it was becoming clear that they were all women, in a casual gang of weekend riders called the “Chrome Divas” who venture out on organized runs for charity.

A bent pedal and a sprained ankle was the early diagnosis. A slightly embarrassed rider, but otherwise everyone ok.

I got her a glass of water and a chair as she waited for a paramedic, and for the auto club to haul the bike to the shop.

The “gang” sped away to the bar for a beer and left the lone biker with us to keep her company until help arrived. In the gathering darkness, it was not apparent right away, but something about this woman was familiar: a turn of phrase, a figure of speech, her laugh?

After returning to the area after a time away, every chance encounter seemed to unlock a childhood memory. Was my memory playing tricks on me?

“Marie?” I asked out of practically nowhere. “Yes”

I was surprised. She was perplexed.

This was an old neighbour and childhood chum from kindergarten who I grew up with through high school. She actually came with me when I got my driver’s license at 16.

We laughed and chatted in the dark for about an hour until her brother arrived, discussing life in the little town down the road where we grew up and all the personalities that lived there.

It was a life moment, pure accident.

The incident inspired me to paint this scene, which I just had to call “Chrome Divas.”

To help with the cause, a percentage of the proceeds from the sale of this painting will be donated to the Chrome Divas charity fund.

The countdown is on for The Coaster Show at Gallery 30 South in Pasadena, California.

Very excited to have new pieces in the show. Iris and Irene can be previewed here.

We made some new friends at the Red, Hot and Blue rockabillly fest in Brockville. Nathalie, Amund, Dave, Heather, Claude, Craig, Trev and Debbie — you made us feel most welcome.

Already looking forward to next year’s show on the Thousand Islands shore.

And we are proud to announce that the Spitfire is the spot to pick up original Bev Hogue art, collectible prints, and fashion necessities  like Pretty Fierce yoga gear emblazoned with Beluxe blue femmes.

In the Brockville area, contact Nathalie Lavergne at the Spitfire Cafe, 10 Victoria Ave. 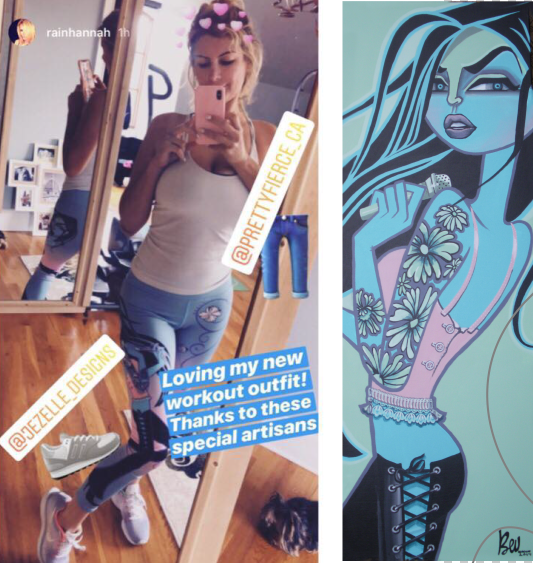 The pants are based on the original Night Moves painting by Bev Hogue.

Thanks for the shout-out from Rain. Maybe we will see you fashioned up with them on the Vince Neil tour.

Available in a style that suits you at PrettyFierce.ca

You can get a pair here.

After several months of treatment for an all-to-common malady these days, and for which I received tremendous medical guidance and support from the Juravinksi Centre, a knock came to my door.

It was esteemed radiologist and all-round great guy Stephen Sagar and his lovely partner Christina.

The good doctor was key to zapping the unwelcome intruders out of my system and also keeping my spirits up.

He was popping in to my studio to have a look at a particular painting that we had talked about — Night of the Living Deb.

The painting was part of an effort several years back to commemorate the masterpiece film Night of the Living Dead by cult director George Romero.

The image of my painting was as part of a collection of images for a book. I kept original of course, and never planned to part with it.

It was meant to be part of Dr. Sagar’s own collection.

Then, the painting had a new life.

As a lifelong fan of Romero and his movies,  Dr. Sagar made a point of meeting the director at a Canadian ComicCon event.

He had the painting with him, all nicely framed and ready for the possibility that Romero might agree to sign.

And he did — just months before he died.

A photo is of two heroes of mine. I cherish the moment and will endure in a very meaningful way. 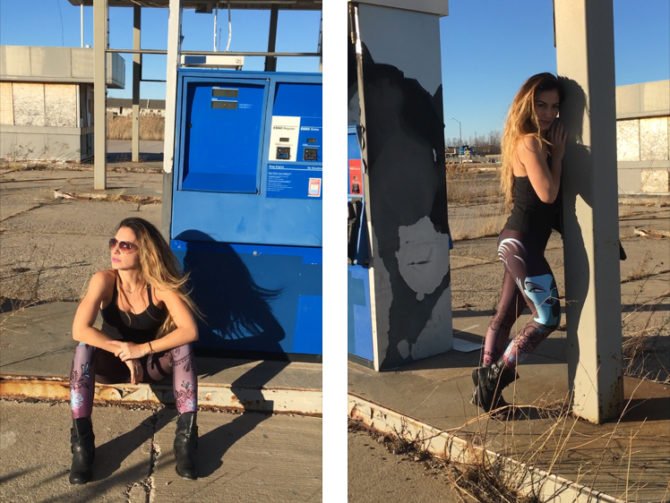 Beluxe is proud to announce the launch of a line of yoga pant designs with partner Pretty Fierce.

“Pretty Fierce is an exciting company to partner with on this important expansion of the Beluxe brand,” Bev says.

“They really get it, and it’s vital to see some of my favourite art scenes presented with with such raw courage.”

This is a sneak peak at the collection. You can purchase this “Ruby Tuesday” style in a variety of sizes directly from beluxe.tv, our Shopify sales site.

Watch for more details to come.

Silver Spoons is an art-wine-food event in the Eastside of Toronto May 13 and 14.

Along with  gourmet food, wine and beer tastings, live music, there will be a pop-up art gallery.

I will have an exhibit of my latest paintings here, so if you are in the city to say hello and see some of my recent work.

The weather in Toronto is expected to be chilly. What better way to chase the “what-ever-happened-to-summer”blues away then to have a few cups at Silver Spoons, District 28. (28 Logan)